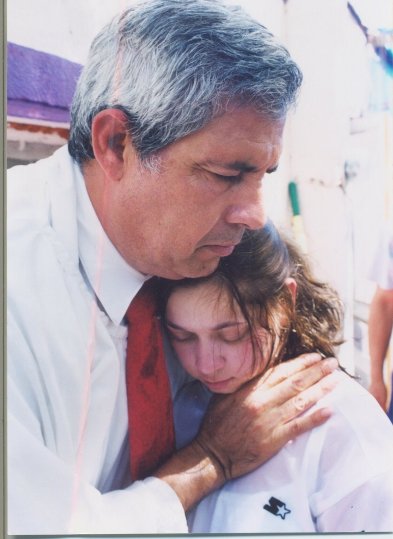 This young girl was not possessed, but she did have evil spirits attacking her.  Alberto seemed to be successful at bringing her comfort and relief.  It didn’t hurt that her father, who loved her a great deal, was there, too.

(excerpted from The WASP and El Curandero)

“I prayed for a fight with the devil, once,” I tell Alberto with as much humility as I can muster.

“At the time I felt courageous and strong. Morally superior. Self-righteous.”

“I understand that.”  Alberto sets the repaired cross on the arm of his white, homemade, wooden throne. It’s obvious he doesn’t think that praying for a fight with the devil is so unusual. “And what happened?” he asks.

“Nothing. Well…” I hesitate because I’m embarrassed. “I was surprised the other women at the altar rail seemed horrified. I thought they would cheer for my heroism. And Father Bob asked God to grant me humility. Then he signed the cross on my forehead with his thumb like he was hitting a bull’s eye.”

As we walk back toward the house, I weigh the odds of Alberto understanding Jungian concepts about The Shadow. I decide it is worth a shot because it’s important information when defending my thesis, theoretically.

“I study Jung, Alberto. Jung was a psychoanalyst from Zurich who says that evil is not really evil, but those contents of the psyche which have to erupt, unbidden, into consciousness, because of too much pressure built up under psychological repressions. Jung symbolizes the repressions as “The Shadow.”  In real life, the repressed feelings can come out distorted in the form of a neurosis, maybe even a psychosis. Ideally, if you can channel your emotions appropriately into the light of day, you can become fully human. Otherwise you might end up acting like a demon.”  I listen carefully for Alberto’s response.

“Who is this Jung?  What spirit does he channel?” he asks with what is apparently first time, lively interest. “He sounds very smart. Is he still alive?”

“No. He died in the 1960s. But I guess you could say he helped his patients channel their own spirits.”

Alberto stops under a mesquite tree and looks at me with inquisitive, long-lashed brown eyes.  “You know, I think I could channel Jung’s spirit.  What was his first name?  Do you have any books with pictures of Jung?”

It would be a momentous occasion to see Alberto channel Carl Gustav Jung’s spirit.  So I agree to bring him some books with pictures of Jung, just to see what he can do with it. Alberto continues walking and talking, with me behind him, trying to keep a straight face.

“Emotions are one thing, but The Devil is another.”  Alberto swivels to put a hand on my back to catch me up with him.  “Some ailments, like desesperación and angusto, can be healed with psychology—I do it all the time—but not demon possession.  The Devil and his army of demons are real, whether you believe in him or not.  He’s not a myth like Santa Claus.  I know.  I have fought the demons in person.  Several times.  I’m known as the Exorcist of Edinburg!  Me, Alberto!”  Alberto sticks out his chest.

Now tell me:  who do you think has the most Integrity?

Fr. Bob for dousing my hubris?

Me, for pushing Jung on the Exorcist?

But, bottom line:  the one who knows himself the best is the one searching and integrating fragments of himself along the way, broadening his functional integrity with the ultimate result he is comfortable in any situation.

You understand, this all happens above the rim?  Tools are called for.